Rushton Stakely is pleased to announce that PowerSouth, a long-time client of the firm, has dedicated a building in honor of Rushton Stakely Shareholder Ted Jackson who has served as General Counsel to PowerSouth since 1978.  During the building dedication ceremony, PowerSouth President and CEO Gary Smith thanked Mr. Jackson for his service to the organization and stated that Ted “is part of this organization’s foundation, so it’s fitting to name a building in his honor…Ted is both our history and our historian.  He’s done so many things that lead us to the future.”  The building is a 44,000-square foot building that houses PowerSouth’s state-of-the-art Energy Control Center, data center, and network operations center.   The building also includes office space for over 50 employees.

Mr. Jackson joined Rushton Stakely in 1970.  He practices primarily in the areas of utility law, taxation, general corporate law, municipal and corporate finance, and the law of cooperative organizations.  Mr. Jackson represents several utility cooperatives engaged in generation, transmission, and distribution of electricity.  He also represents agricultural cooperatives, a large number of corporate and other business clients, and bond issuing authorities.  He has received numerous awards throughout his career, and he has been recognized repeatedly by The Best Lawyers in America. 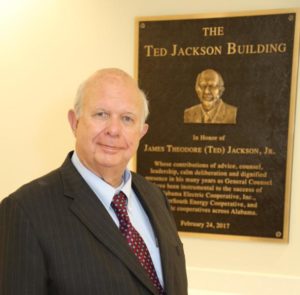